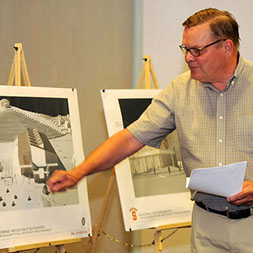 Syracuse, N.Y. — Syracuse University has cleared the final legal hurdle in building its new indoor practice facility and has begun preparing the site for construction, a university official said.

Senior vice president of public affairs Kevin Quinn said the university picked up its building permits from the city of Syracuse on Friday and construction company Hayner Hoyt began site preparation work early this week. Quinn said he did not know when construction would officially begin but hoped it would be "very soon."

"This is the last hurdle in terms of permitting," Quinn said. "There are certain benchmarks in the actual process that we need to hit. Site preparation work has started. While we don't have an exact start date, hopefully very soon we'll begin the actual construction."

There has been noticeable movement at the site outside Manley Field House this week, with the outdoor track being removed and heavy equipment being moved in. On Thursday morning, a handful of workers were removing trees and leveling the ground.

The activity was a stark contrast to the nine months since Syracuse held its official groundbreaking. Since then the site has been largely dormant, a patch of ground covered by a blue tarp.

"It's common for university and institutions to hold ceremonial groundbreakings as celebrations and an opportunity to tell the story about a new project," Quinn said.

After the groundbreaking, however, the site went largely untouched and Syracuse moved back its initial estimated completion date from April to August.

During the groundbreaking, Syracuse officials said the project would likely take eight months. Joe Giansante, the chief of communication for SU athletics, has said previously that work had been done off-site and the building would go up quickly once construction begins.

When asked if the IPF would still be completed by the second target date, Quinn repeated twice that the IPF is a "top priority" for the university.

Before the building permits were granted, the university and Syracuse Mayor Stephanie Miner had to adjust local law.

Syracuse needed to receive an easement allowing it to build over the city's storm drain, a process that required the city to survey its infrastructure, hold a pair of city council meetings and a public hearing before the law could be adjusted.

Giansante has said that the delay was not unusual and typical of projects the magnitude of the IPF. Beth Rougeux, the director of administration for Miner, said the same.

Quinn reiterated that Wednesday. He said he couldn't pinpoint the reason that construction for the IPF fell behind schedule but noted that Syracuse was working with both the City of Syracuse and Onondaga County governments to solve drainage issues.

"The city, county and the university are three bodies that are all working on a number of projects at the same time," Quinn said.

Working things out with the City of Syracuse was the final step, one that was finally taken late last week, bringing the lengthy process one step closer to completion.

"The unique thing was they needed an easement for a storm drain, an easement to build over our infrastructure," Rougeux said. "Not many people build over that, so it required us to change the law, and all the normal procedures were followed for that. The easement was the critical portion."