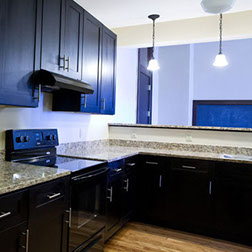 SYRACUSE, NY -- St. Patrick's School on Syracuse's Tipperary Hill is reopening as loft apartments featuring some of the same classroom blackboards that students and teachers used for almost a century.

The Hayner Hoyt Corp. has turned the 23 classrooms at the former school at 300 N. Lowell Ave. into 22 one- and two-bedroom apartments. The first tenants of St. Patrick's Lofts, as the building is now called, are scheduled to move in Friday.

The Roman Catholic Diocese of Syracuse closed St. Patrick's School, along with three other parochial schools, in a cost-cutting move in 2006. St. Patrick's Church, directly across Schuyler Street from the former school, remains open.

Hayner Hoyt's $5.2 million transformation of the building has left many reminders of its former use. The school's old blackboards still hang on the walls. Each apartment has at least one blackboard -- and some have up to four of them.

"You want to write down your grocery list?" said Gary Thurston, Hayner Hoyt's chairman and CEO, looking at one of the blackboards. "You can do it right there. Got your grandkids and want to keep them busy? Just give them the chalk and you're all set."

The apartments and the building's super-wide hallways have the school's original, creaky hardwood floors. The original, tall baseboards are still there, too.

All of the building's windows were removed, refurbished and put back in place, where they provide tons of natural light and impressive views of the surrounding Tipperary Hill neighborhood and, in some cases, the Syracuse skyline. Hayner Hoyt installed storm windows in front of the original windows to improve energy efficiency.

Student lockers still line the building's hallways, but they have been sealed shut. Each apartment also features 14-foot-tall tin ceilings, the same ones students saw when they gazed upward during class.

There are plenty of other reminders of the building's past use. Students who found their way into the school's attic over the years liked to scribble their names on the walls. There are dozens of names up there. ("D. Walsh '69," Tony D. '76," "Dobbs '87" and "Dick Cassidy '71," to name a few.)

The building does contain a number of modern touches. Each apartment has its own heating and air conditioning unit, modern appliances, granite countertops, and a washer and dryer. The lights hanging from the apartments' ceilings look like the type one would find in an old school, but they're brand new. Two elevators were added to the building.

St. Patrick's Church opened the original, three-story portion of the school in 1909 as an elementary school. It built a two-story addition in 1930 for the higher grades.

After its closure in 2006, the diocese tried to sell the school but couldn't find a buyer. Then Thurston came along. The church sold him the building for $1 in March of 2012 in a deal that gives the church limited use of the old school's gymnasium and basement meeting hall.

Thurston said he's pleased to have been able to bring the building back to life while preserving its historic character.

"It's kind of an icon in the Tip Hill area," he said. "I don't know how many thousands of kids went to school here, but there were lots. It's just amazing the number of people who have some kind of connection to it."