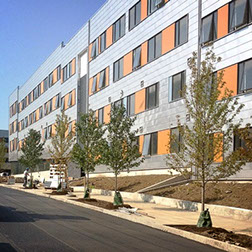 Aeroseal technology, developed at Lawrence Berkeley National Laboratory with partial funding from the U.S. Department of Energy, was used to seal air ducts in the four-story building, officials said.

Applied as an aerosol mist that is blown throughout the inside of the ductwork, Aeroseal sealant remains airborne until it encounters a leak. The sealant particles then accumulate around the leak and bond together until the leak is sealed.

“As energy efficiency standards become increasingly stringent, we will need to turn to new technologies like Aeroseal,” said Sam Doss of the Hayner Hoyt Corp., a Syracuse-based building contractor, in a statement. “It was a game-changer for this project and a key to our ability to meet the NYSERDA requirements,” he said.