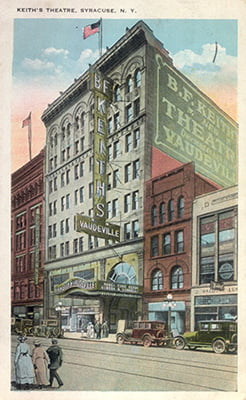 The City Center is currently under renovation and seeking to welcome future large professional office tenants.  With spacious full floor office spaces and an attached parking garage, the building holds its own in comparison to other downtown located buildings.  Not only does the project boast amazing amenities, it also celebrates a location rich with both Syracuse history and artistic and cultural life.  Its journey from then to now holds a century worth of experiences, owners, demolitions, builds, and renovations.

Over 100 years ago, celebrating a grand opening on January 26, 1920, Keith’s Theater enjoyed the title “the most beautiful theater in America.”  Located on 400 South Salina Street in downtown Syracuse, the building was designed by Thomas Lamb.   He is also known for his build of the Loew’s State Move house, now known as the Landmark Theatre.

As time passed and entertainment trends shifted, the theater remained relevant by adapting to the times.  It began showing silent films, featuring Wilma the pipe organ, until 1967.  It was then demolished, as did much of the rest of the 400 block, in order to make room for Sibley’s department store.

Sibley’s celebrated 20 years of success until it closed in 1989.  The space was then converted into a variety of offices including National Government Services and Excellus BlueCross Blue Shield, whom vacated in 2013.  The following year, in 2014, developers purchased the space and renamed it as City Center.  Gary and Jeremy Thurston of our very own Hayner Hoyt became majority owners.

Redhouse Arts Center, a partial owner and primary tenant, provides a series of benefits for tenants as well.  It offers flexible rentable spaces with customizable lighting, sound and video capabilities suitable for a variety of corporate and private events.  This specific section of the building celebrates its architectural history by maintaining the original tiles from the Sibley’s department store days.  Windows were also salvaged and re-purposed as walls in the administrative wing.

The present project, designed by Schopfer Architects, will feature a courtyard cut out of the existing building bordered by glass walls meant to highlight the ground level retail spaces.  The top floor office space will have the addition of an outdoor balcony.  The building is conveniently located downtown, residing in close proximity to the Landmark Theater and Armory Square. This makes it a prime location for shopping!

Unlike a majority of downtown buildings, City Center hosts a parking garage consisting of 750 parking spaces.  This makes it extremely accessible for office staff and visitors!  It offers a 40,000 square foot option for full floor tenants.  For those needing a smaller space, it entertains a 15,000-25,000 square foot option.  These beautiful, spacious office space options, along with the attached parking garage, serve as distinguishing features of this unique build.  City Center is set to welcome tenants in the Spring/Summer of 2021. 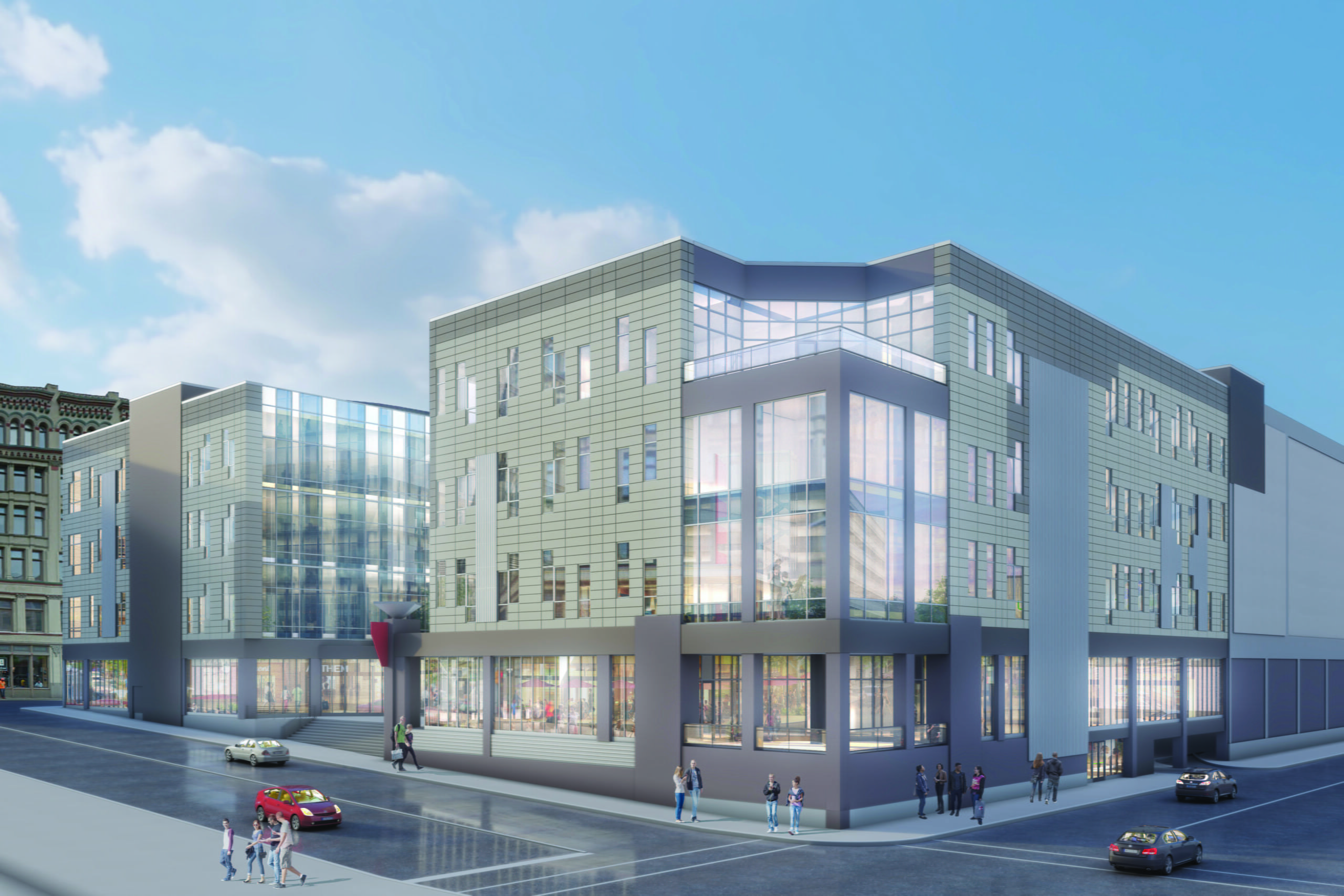